Skip to main content
Home Blogs Café Sabora's blog Does coffee make you fat or is it just a myth?

Does coffee make you fat or is it just a myth? 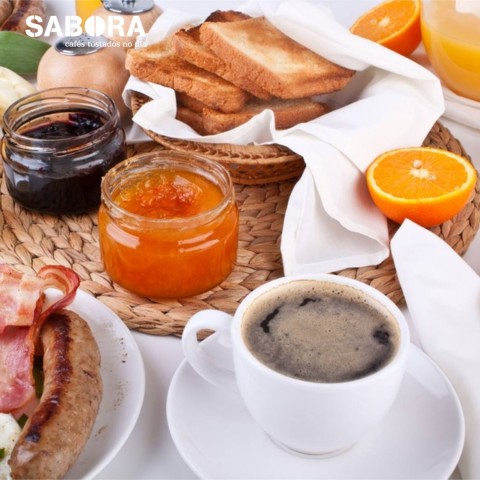 Coffee does not make you fat

What accompanies coffee if

Doesn't coffee make you fat? what accompanys coffee if

If coffee makes people fat or not is a controversial issue. The question “does coffee make you fat?” will be addressed in this post.
Coffee has been considered by many people as a negative influencer to our health, since it is thought to lead to weigh gain, rise blood pressure and contribute to body complications.
It is necessary to clarify a number of issues from the beginning, since having a cup of full-sugar coffee, energetic content will come from sugar instead from coffee; or if coffee is part of a continental breakfast, as the one in the picture above, maybe the less thing that what make you fatter is coffee, as well as if you take coffee with alcohol, like carajillo or Irish coffee, it cannot be stated that coffee produces an alcohol increase in blood, it is due to the whiskey, isn’t it?
The truth is that we cannot give an absolute answer to the question “does coffee make you fat?”, as almost everything, things are not black or white, but grey.
Let’s focus on the point, if we go back to 2008 we will find a report on effort recovery, in which it is proved that sporty people making physical effort have a better recovery if their diet include caffeine and carbohydrates, i.e. these elements improve effort recovery of sporty people.
We are talking about people who regularly practice sport and the quantity of caffeine, not coffee is over five or six cups of coffee. This report stated that coffee favours hydrate assimilation and coffee makes people fat as it contains caffeine.
Actually, having five or six cups of coffee cannot be considered as moderate consumption, which is over two or three cups a day, maximum. Maybe, we are misunderstanding report conclusions. In order to know more about it, you can read the article at Vitonica.com, which states that moderate consumption of coffee hardly produces gain of weight caused by a higher hydrates absorption.

Other reports say that if people have a cup of coffee regularly, it leads to a loss of weight, since fat is reduced thanks to a caffeine feature called thermogenesis, that contributes to burn fat through oxidation by stimulating nervous system.
For example, if a cup of regular coffee is included at breakfast, a thermic effect is produced during approximately 3 hours in our body, and energy consumption increases in a 16%, in a 2-hour period, according to Westerterp-Plantega report "Green tea catechins, caffeine and body-weight regulation" published on Physiology & Behaviour.
However, to know if coffee makes you fatter or not, we should take into account the different effects caused in different kind of people, as nervousness, insomnia or anxiety. Actually, stress caused by these symptoms can be actually produced Stress may be really caused by eating more than what we usually do. Anxiety and stress actually contributes to gain weight.
A good option is to have a quality decaf coffee reducing caffeine to the minimum preserving coffee aroma and flavour. If caffeine really affects you, do not take it.
Coffee provides calories from hydrates and proteins, basically, although it also contains fats in low amounts. If we consume coffee moderately, calorie content will not be relevant when gaining weight. We should know that coffee is roasted coffea bean.
Coffee also contains chlorogenic acid, a substance that inhibits pre-adipocytes growing, cells precursor that stores fat and also helps small intestine not to absorb so much glucose.
If you really want to go further in this issue, you have an amazing article on the website www.infoalimentacion.com, in which there is a deeper explanation about coffee and weight.
To sum up, coffee has been proved to have health benefits and to be a supporter to sport people’s effort recovery. If you are not a sport person, you can include the moderate coffee consumption in your diet, not exceeding two or three cups a day and if you observe you feel anxious or nervous you should change to the decaffeinated kind.
Take into account that if you use alternative sweeteners instead of regular sugar you will consume less calories, skimmed milk has less fat than full-creamed milk and cream and chocolate increase calories when having a coffee.

Does coffee make you fat or not?

We can say that coffee does not make you fat if you have moderate coffee, you have a balanced diet and do some sport: this way you will keep your body healthy.
If you liked this post, please share it on social media. Do not hesitate to make a comment by using the questionnaire below